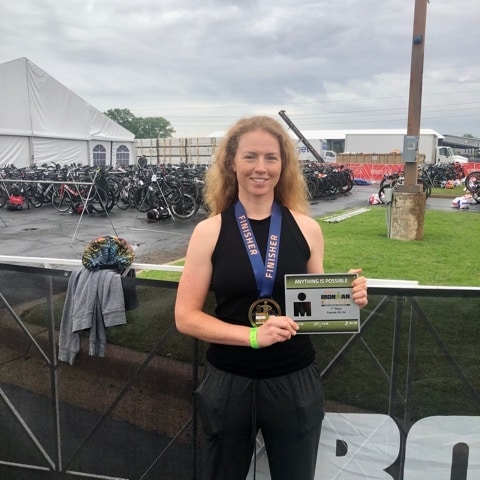 “I nearly cried laughing tears when I found out I had won. Every race I assume there is going to be one stand-out person…realizing I was that person was a lot to comprehend.” 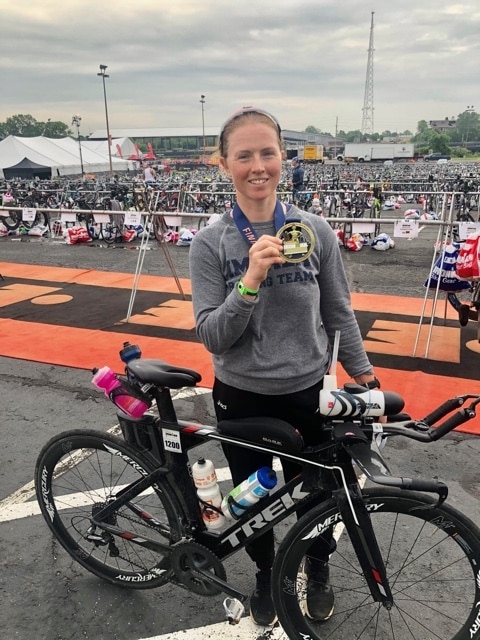 Those were the words of Brianna Stubbs in a phone conversation she had with me just two weeks after winning her age group at IRONMAN Tulsa. Brianna dreamed of this blissful day, but had no idea that her preparation would lead her to not only a first-place age group female finish, but additionally, qualification for the 2021 IRONMAN World Championship in Kailua-Kona, Hawaii. Brianna took me through her five-month buildup to race day using Athletica’s Artificial Intelligence coaching platform.

Brianna is not new to rigorous training but has not always channeled her energy into the triathlon. As a previous elite lightweight rower on the Great Britain Rowing Team, she won events at the rowing World Championships twice: one silver and one gold at junior and U23 level, then a silver and gold as part of the senior team. Narrowly missing out on the 2016 Olympic selection, she retired from rowing and moved to California in 2017 where she found triathlon.

At her first 70.3 Ironman (colloquially known as a Half Ironman) in 2018, Brianna qualified for the 2018 Isuzu IRONMAN 70.3 World Championship in South Africa. Revealing a clear talent in the sport, Brianna started working with a triathlon coach in December 2018 in preparation for her first Full IRONMAN, IRONMAN UK, in July 2019. Brianna describes her first IRONMAN as a positive experience but notes that though she showed up to the race “really fit, the training was emotionally exhausting.” Having already experienced the life of a professional athlete through rowing, Brianna was now trying to balance a heavy triathlon training schedule with work and other priorities. The lack of individualization and flexibility in her current training made this difficult and Brianna questioned how hard she wanted to train to achieve that level of fitness.

COVID-19 and the cancellation of 2020 races allowed for a natural transition away from this “exhausting” training regime. Brianna paused her current coaching situation. Though she continued training and kept elements of structured training in her routine, she also did more “fun stuff,” making for a more enjoyable training experience. At the end of 2020, when 2021 races began to appear, Brianna contemplated her 2021 triathlon goals. Having already twice qualified for the 70.3 World Championship (2018 and 2020 though the 2020 Championships were cancelled), Brianna had yet to qualify for the coveted IRONMAN World Championship annually held in Kailua-Kona, Hawaii. She decided to give herself another shot, as she narrowly missed out qualifying at IRONMAN UK in 2019. She chose IRONMAN Tulsa on May 23, 2021. With just over five months until the big day, Brianna next needed to decide how she wanted to chase World Championship levels of fitness. She was unsure she wanted to return to the “emotionally exhausting” coaching situation she had endured in 2019, and thought more structure was necessary than the training she had adopted in 2020.

Brianna re-connected with friend Paul Laursen, CEO of Athletica. He shared with her what he and the Athletica team were creating to bring athletes and coaches access to optimized individual training programs through machine learning algorithms all communicated through Athletica’s proprietary training platform. She decided to give Athletica a try. 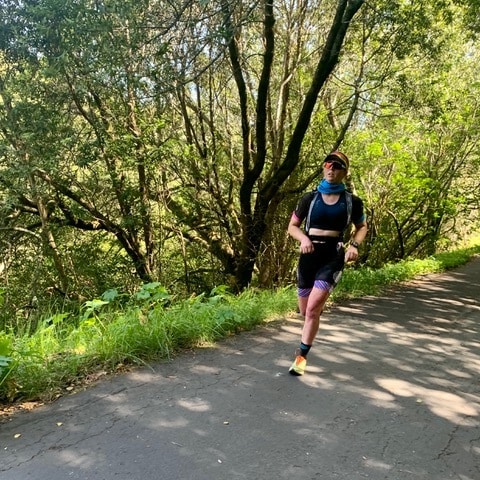 Brianna started using Athletica in January 2021. When a new user begins with Athletica, the user undergoes an onboarding process where they input personal information and athletic history to help the engine gain a baseline knowledge of the athlete in order to produce an individual training program specific to the user’s abilities and goals. After informing the AI platform of her goal race in May, the plan was instantly formed, and Brianna’s training began.

Brianna describes her experience as a “really nice balance of accountability and independence to take advantage of days I felt good. [The Athletica platform] gives structure but allows for the empowerment of a mature athlete who desires more of a training blueprint.” In reflecting on the difference between Athletica’s training platform and her past training experiences, Brianna notes the ability to provide feedback after each workout that is automatically utilized was important. For each workout, Athletica users have the option to leave an RPE (Rating of Perceived Exertion) score, a Feeling score, and a written comment. Brianna used this feature often and noted how it was reassuring to see her training adjust in response to the feedback given. This was a piece of her training she felt she was missing from previous training programs.

As shown in the figure, Brianna observed her training load increase in the lead up to race day, and gained confidence from tracking objective workout metrics indicating her body was adapting to the increase in training load. Note how loading increases progressively (not erratically) across the length of the build to enable progressively greater fitness levels. 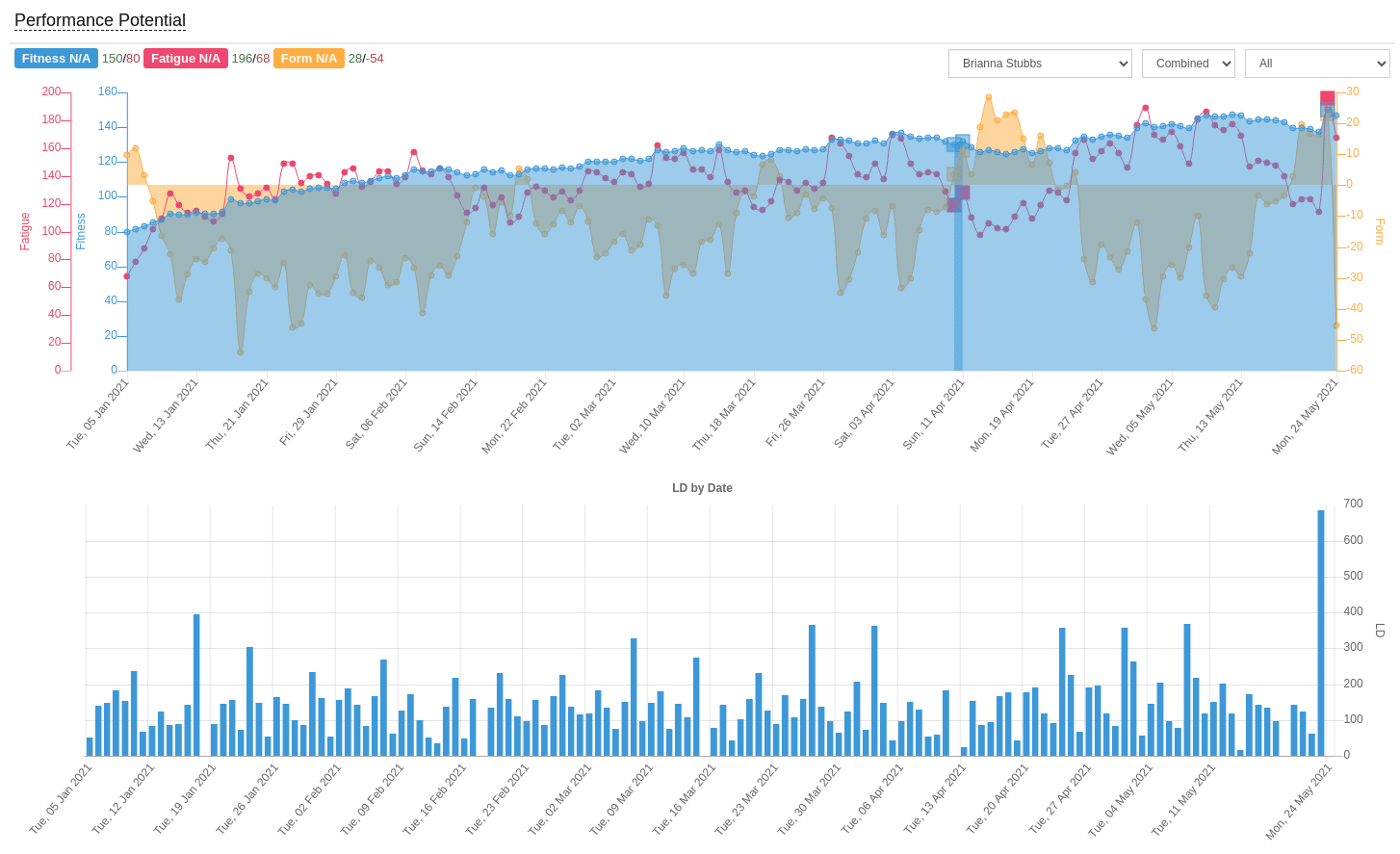 May 23rd came, and Brianna approached the IRONMAN Tulsa starting line with an excitement that can only be attained from months starved of racing opportunities and a confidence in her fitness. Brianna consciously told herself at the start of the swim, bike, and run to not get too excited for fear she would go out at an unsustainable pace. Race day open water swims are often intimidating for many triathletes, but months of swimming in the California oceans had well prepared Brianna and 69 minutes later, she was out of the water transitioning into what looked like it would be a wet and rainy bike ride. The entire bike was a battle with several strong women competitors passing and re-passing each other. One woman in particular Brianna recalls passing and re-passing three times before Brianna realized that she wasn’t going to see her anymore. Transitioning into the run, Brianna noted her bike time: 5 hours and 24 minutes. Despite being a relatively flat bike course, she was briefly worried she might have “overcooked it.” But as any seasoned athlete knows, hindsight concerns offer no value in moving forward. Prior to the race, Brianna had said her big stretch goal for the marathon section of the course would be a time of 3:30. She slipped into her Nike Next % shoes and once again tried to reign in her excitement as she felt the bounce of the “little trampolines” beneath her feet. Embarking on the two-loop run course, Brianna spied women in the professional race happening simultaneously. She relished in the opportunity to feel like she was a part of their stories…on her way to creating her own. When Brianna first suspected she was running as the first-place female for her age group, she had only one thought: “don’t blow it.” 10 hours, 15 minutes, and 6 seconds after starting the race, Brianna finished as the first female in her age group, and earned her spot to the 2021 IRONMAN World Championship in Kona. Her finishing marathon time was 3:29.

“I nearly cried, laughing tears when I found out I had won. Every race I assume there is going to be one stand out person…realizing I was that person was a lot to comprehend. After years of rowing at such a high level, it was a real validation that I had enough baseline grit and physical talent that I could train and be good at something else as well.”

In the weeks following her accomplishment, Brianna is enjoying a little less structure to her training and the fun activities a California summer has to offer. “I might buy a gravel bike.”

The 2021 IRONMAN World Championship in Kailua-Kona, Hawaii will take place on October 9th. Looking forward to Kona, Brianna plans to start the buildup in July, using Athletica as her guide. Having experienced a range of training strategies, Brianna knows what she is looking for. Athletica provided her a “good structure that got me really fit, but also the freedom to do things I wanted to do, which made the training much more enjoyable.” Recalling some of the training bike rides from her IRONMAN Tulsa buildup:

“I broke many of my male friends on some of these rides and it was fun to see them laying around prone the rest of the day.” 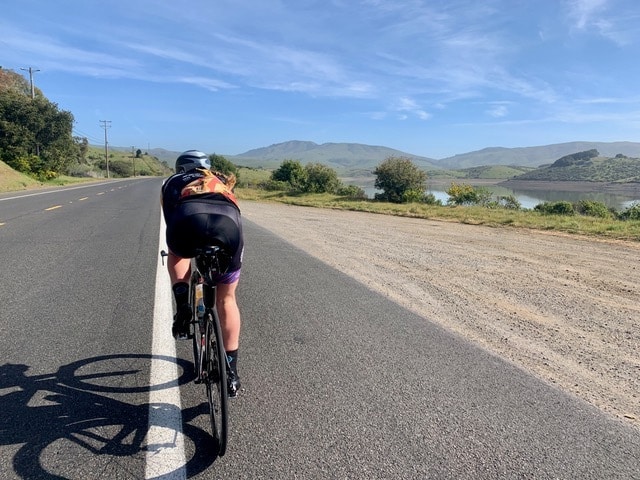 When considering her goals in competing at Kona, do not misinterpret Brianna’s intentions. She has not yet quantified her goals but knows herself.

“I am very competitive, and it is hard to say no to a challenge.”